The loading and unloading of tankers with petrochemical fluid ranging from crude oil to cryogenic LNG is a daily occurrence throughout the world. However, it is an operation fraught with danger due to the combination of high flow rates, relatively short distances and intermittent operation. Industry regulations require transfer flow to be stopped rapidly in the event of any emergency, which often means valve closures of around 5s and the generation of high and rapidly applied surge pressures / pipe loads. Experience has shown the potential for damage to pipework and/or hoses, spillage and failure of equipment.

The problems encountered in a typical ship transfer system will include:

Hydraulic Analysis Limited have undertaken significant numbers of ship loading and offloading studies throughout the world. We can typically assist with:

As with all types of projects Hydraulic Analysis Limited would be pleased to offer a free appraisal of any scheme given some basic details of the system’s layout and operation.

A number of key personnel in Hydraulic Analysis Limited hold SIGTTO approved qualifications to operate LNG Tankers and LNG Tanker Cargo Equipment. In our experience, incidents during loading or off loading are often caused by a lack of knowledge and understanding of the different requirements and actions of onshore and offshore operators. There is a clear shortfall in knowledge throughout the industry in understanding the different approaches taken by onshore and offshore operators and we have taken measures to bridge that gap in order to ensure all considerations are addressed when designing LNG loading or unloading facilities. We are fully aware of the practicalities involved in operating LNG carriers and we have a detailed knowledge and understanding of the design and operation of LNG tankers. We have experience with the practicalities of alarm settings, trip settings and relief mechanisms. Copies of the SIGTTO approved certificates are available on request. 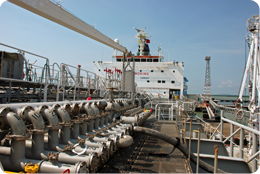